Last week a CALENDS paper on MUSE commissioning data, led by Vera Patricio, was accepted in MNRAS. It is the study of a redshift 3.5 lensed galaxy, observed in the SMACS2031 cluster, that first caught our attention because of its extended Lyman alpha halo (check the figure below!), that traces the gas around the galaxy. Usually, these halos are studied by combining the signal of several dozens of galaxies, since they are not very bright, but by making use of MUSE and gravitational lensing we can see these galaxy outskirts individually and with higher detail. An interesting result that we were able to obtain from these data was a velocity map of the Lyman alpha and  CIII] line (see figure as well). The first line traces the neutral gas, and its analysis can give us some clues about its density and geometry, while the second line probes the regions where stars are being born and the hotter gas kinematics. From the same MUSE data, we also extracted high quality spectrum (that you can also see below) from which we learn much about this galaxy, confirming that it has the typical mass and luminosity of most galaxies at the same epoch,  deriving the temperature, density and chemical composition if its gas and the age and metallicity of its stars. 1 — The SMACS2031 cluster observed by MUSE. The boxes indicate the place where the 5 multiple images of this z=3.5 galaxy can be found and the red line traces the mass model that allow us to predict its unlensed properties

2 — An image of the Lyman alpha emission of this object. On top of it, the magenta contours trace the CIII] emission

4 — The spectrum of this object with some interesting emission and absorption lines, that allowed us to study the properties of the gas and stars of this galaxy.

I’m Guillaume, I was born in 1991 in Strasbourg (France) I spent all of my studies there and I joined the CALENDS team in Lyon for my master internship and with not so much hesitations for my PhD on the same subject. My passion for astronomy appeared with my first telescope nine years ago, and since this date this passion grows up each day of each year to lead me in astrophysical studies and did internships in astronomy on astrometry and X-ray binaries. But now I start my PhD on gravitational lensing.

One of a CALENDerS subject is to study distant sources. But before studying them, you have to find them, especially when you observe a lensing clusters. A lensing cluster is a group of galaxies, containing stars, gas and Dark Matter which deform enough the space-time to curve the path of light. To find them, with 2D images which are deeper and deeper, I would like to use the knowledge of lensing properties and galaxies in a new software which I developed and named MISE (for Multiple Images Searcher).

Indeed, sometimes in the core of clusters you have several images of the same source and I want to find them all. In addition, to find correctly these images you have to model your galaxy cluster, and this is the other big part of my PhD, because with this correct modelisation you can provide lots of constraints by example on the cosmology of our Universe.

Recently I produced a 2 minutes video (in French) about my PhD for the International year of light. You can find it here. 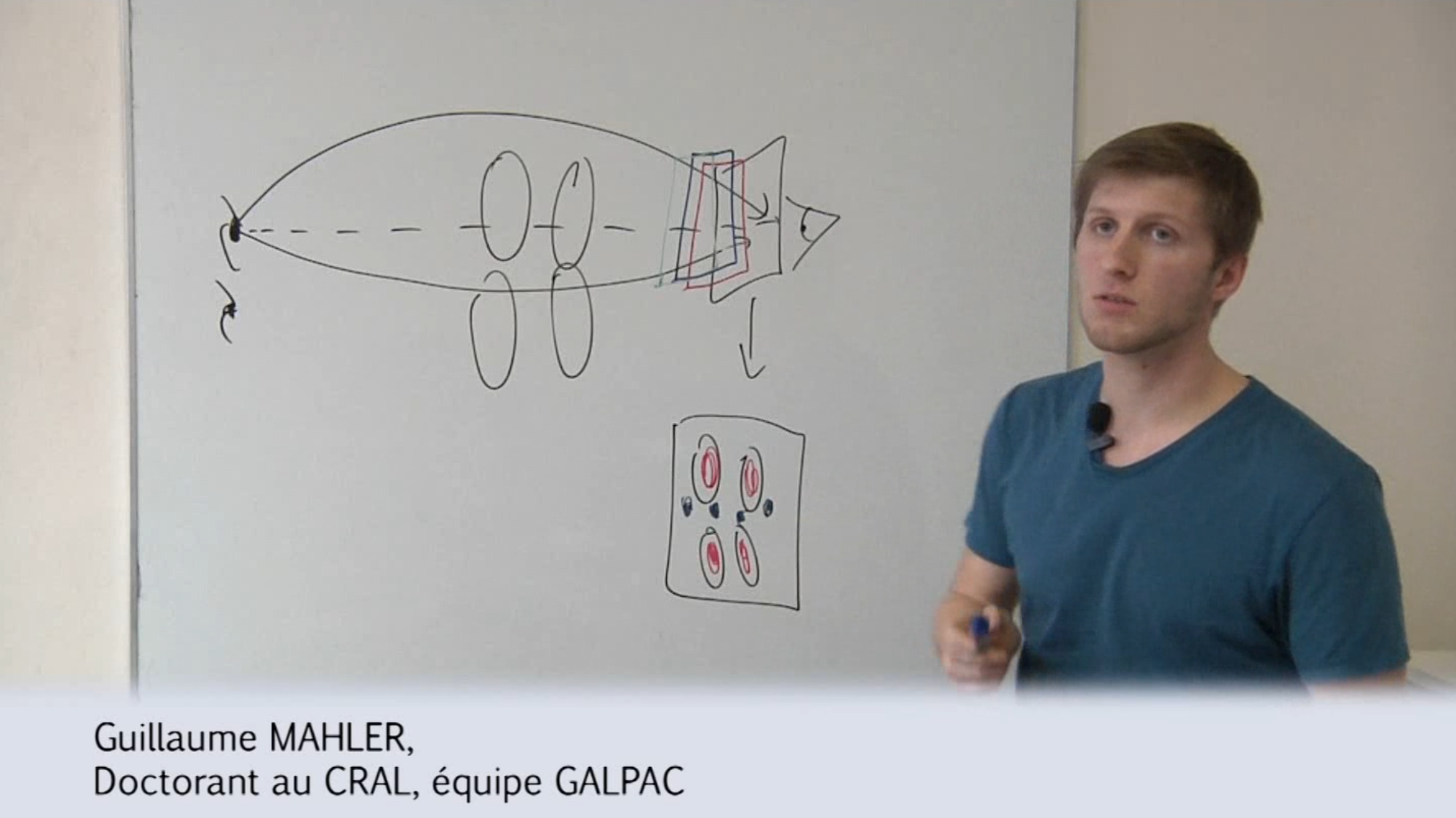 This December Vera and I (Johan) were part of the observing crew on MUSE, to perform observations on the Very Large Telescope as part of the Guaranteed Time, together with Lutz from Potsdam and Monica from Leiden. We spent a bit more than a week on the mountain and had almost ideal conditions for most of the run, which was very fruitful!

We also enjoyed being in the middle of the Atacama desert, with amazing views and colourful sunsets. 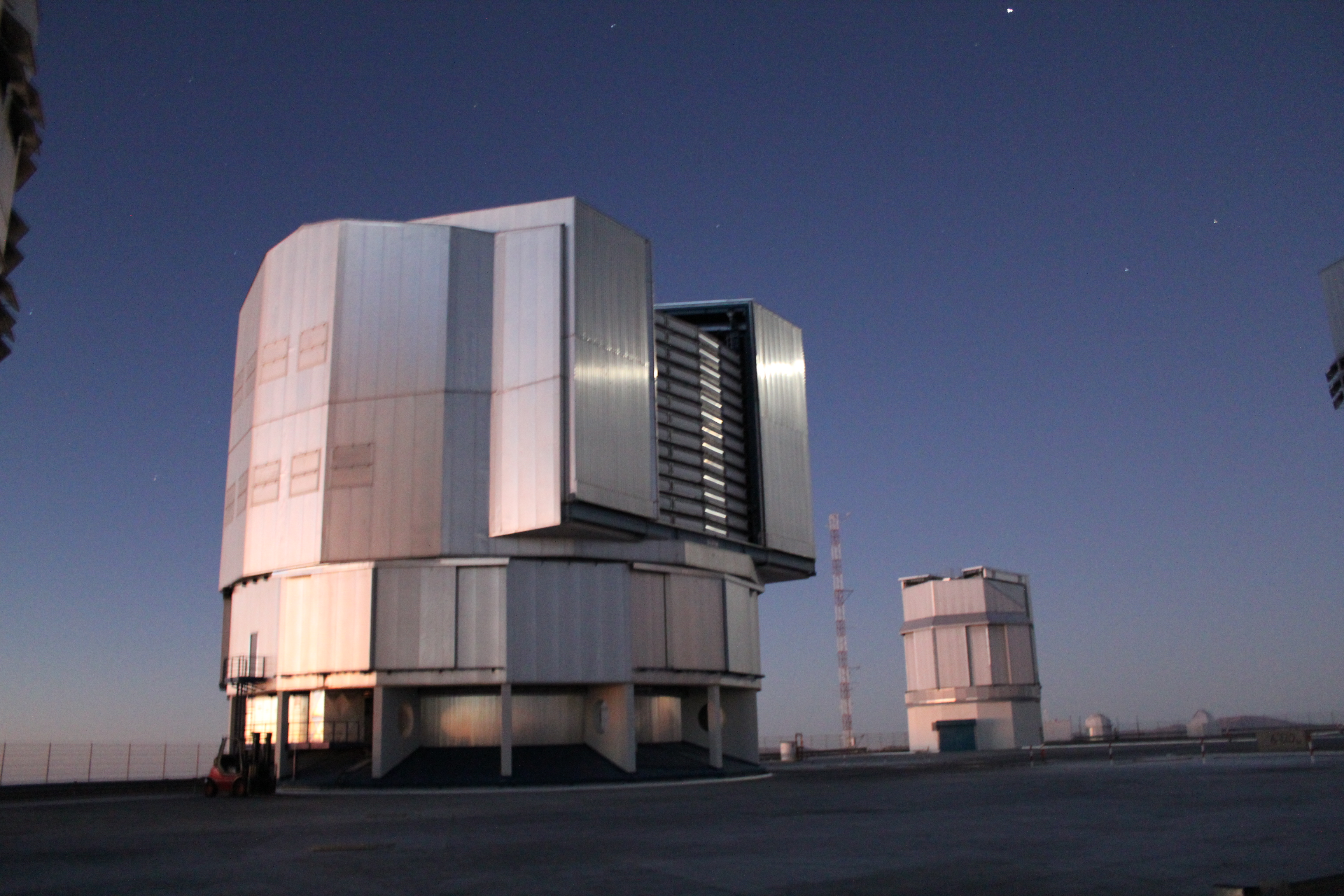 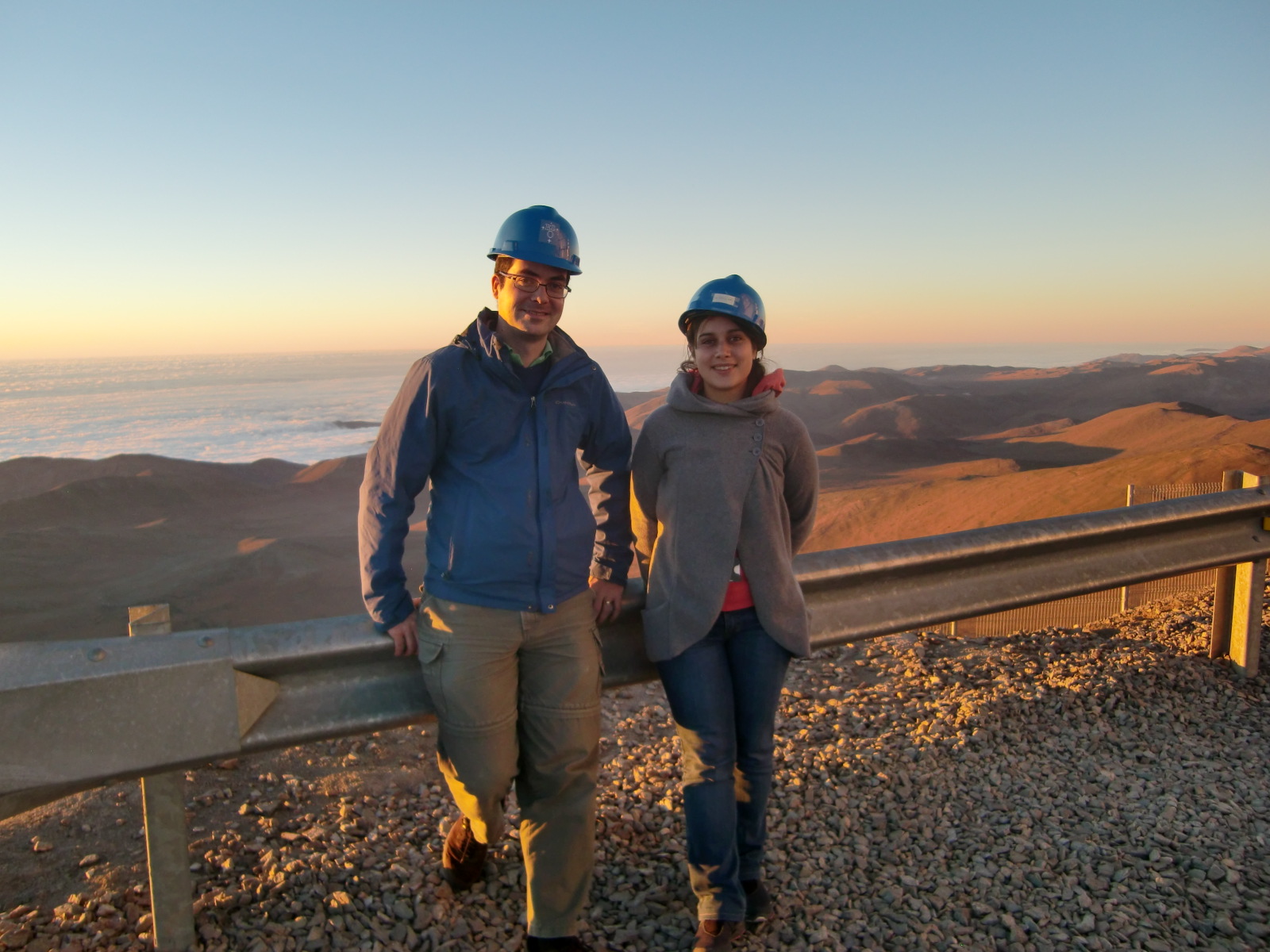 All CALENDers have gathered early december in a nice hotel near Montpellier
for the general kick-off meeting. This was organised as a joint kick-off
between the CALENDS team, the MUSICOS team (another ERC-funded project dedicated
to diffuse gas emission from MUSE), and the FOGHAR team (an ANR-funded
collaborative project between Lyon and Toulouse institutes for the analysis
of MUSE data). Indeed, all three projects started within the last year, and we
decided to coordinate the efforts related to the analysis of MUSE data,
in particular the deep fields.

It was overall very productive and interesting to learn about each other’s
projects, in particular with students and postdocs coming from a different
academic background (software engineering, astrophysics, signal processing).
We all came back with many new ideas and plan for the future of CALENDS.
We also enjoyed sharing the ‘CALENDS car’ for the trip, and the company of
the giant cat which soon became the mascot of the meeting.

I was born and raised in Lisbon, Portugal’s capital, where I completed my physics degree at Instituto Superior Técnico. When the time to do my master thesis arrived, I had the amazing opportunity to work with Myriam Rodrigues, an ESO fellow in Chile, in her project which aimed to understand how much we can know about the stars that make up a galaxy by analysing its total spectrum. It was the first time that I had the change to study galaxies and I was in love with it at once. I even got the chance to stay a few days at the Very Large Telescope, learning about its instruments and about the work of observers. By the end of my Master, I had decided that the coolest job in the world was to observe galaxies and study their evolution. So I found the perfect place to do it here in Lyon, within the CALENDS team: I’ll be looking into very distant galaxies, whose details can only be disentangled thanks to magnification caused by gravitational lensing, and try to place them in the big picture of galaxy evolution.

During my PhD I will analyse several arcs – galaxies that we see very magnified but also very stretched due to distortion introduced by the lensing, and try to figure out what stars compose them, what chemical elements are there and how are their stars and gas moving. To do so, I will mainly use MUSE data, which offers us a unique combination of spectral and spatial analysis, perfect (also!) for this kind of study. On October 23, PhD students both from the Observatoire de Lyon  got together to present their work at the 4th ‘Congrès des Doctorants’ (http://doctoraleslyon4.sciencesconf.org).  The congress was split into four sessions, that spanned topics from paleoenvironments to mantle convection, and was open to master students, university professors and researchers. I gave a talk in the ‘Star Wars’ session, cheered up by CALENDerS & Friends, to present my recent work on a galaxy at redshift 3.5 lensed by the SMACS2031 cluster. In the time let for questions, we learned that seismology uses very similar principles to lensing to study the mantle though seismic sound waves, just like we do with light waves! After a few months of latent hard work with little news on this page, the CALENDS
project gets a fresh new start with the arrival of our new recruits!

MUSE is now fully commissioned, and we started the first science observations in
September and October. One of the lensing clusters observed during commissioning was
analysed and the results published in the first CALENDS paper: 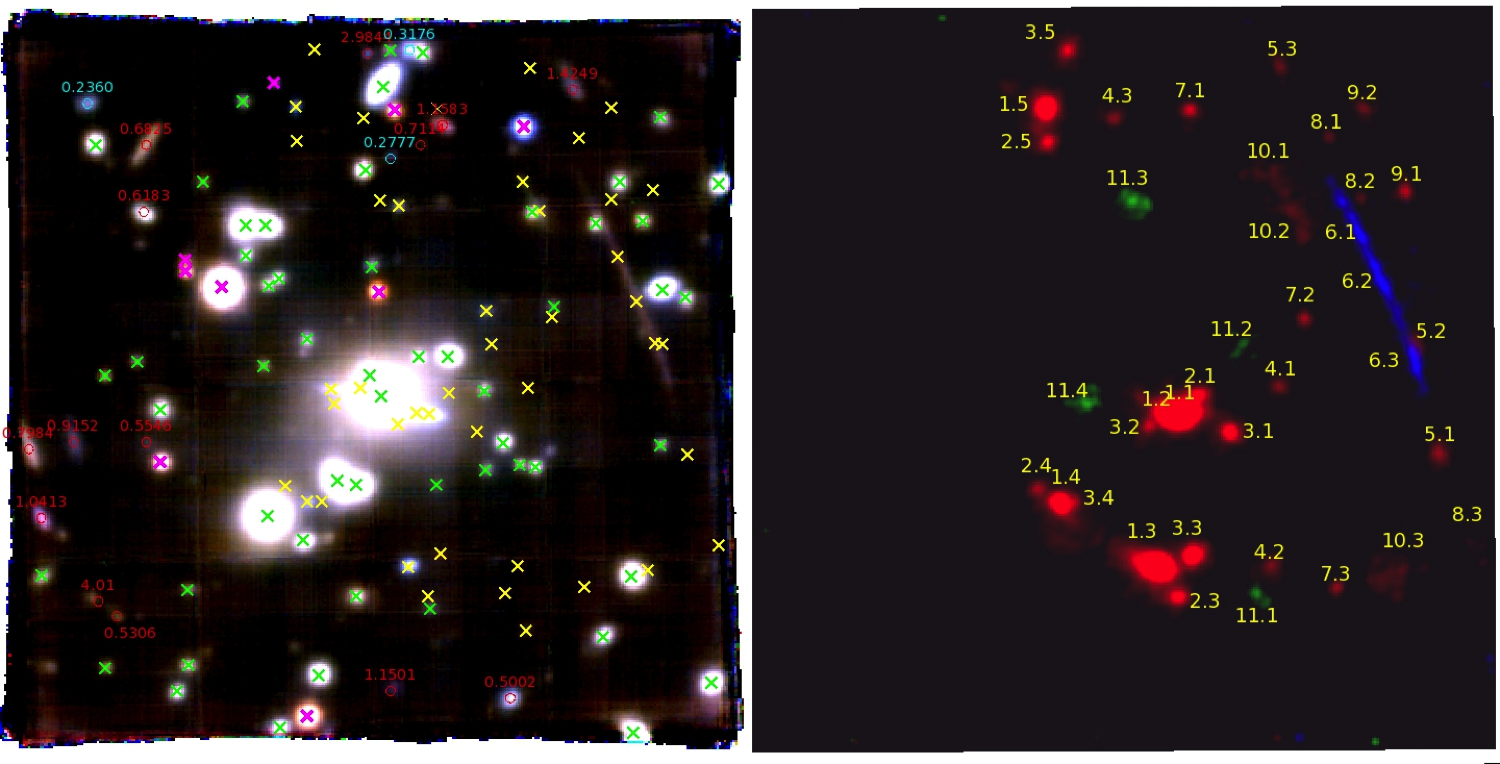 We also have a brand new logo! Thanks to Guillaume and Benjamin for working on it.

In the next entries we will introduce each of the team members with their past, current
and future projects. Stay tuned for more news !

We are currently at Paranal, performing the commissioning of the Multi-Unit Spectroscopic Explorer (MUSE).

The instrument is performing very well so far! We were able to take some very nice pictures and spectra. Here is a preview color image of Jupiter: 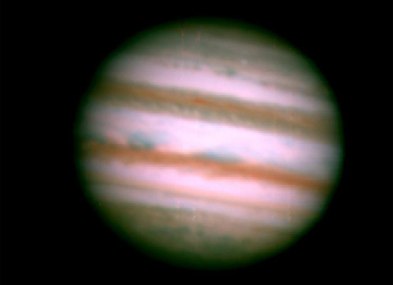 You can follow in details what is happening on the dedicated blog:

Applications are invited for 2 postdoctoral positions in observational cosmology / physics of galaxies, to be part of the CALENDS research group led by J. Richard at Lyon Observatory. CALENDS (Cluster And LENsing Distant Sources) is an ERC-funded project for the analysis of observational data on lensing cluster fields. The applicants will be encouraged to analyze large multiwavelength datasets obtained(or scheduled) on low-luminosity lensed galaxies at 1<z<7 (including HST,Spitzer,Herschel,MUSE,ALMA,KMOS,…) and study their physical properties (both resolved and unresolved) against more massive samples selected in blank fields.

The successful applicants will work in the exciting environment of Lyon Observatory, one of the leading astrophysics Institute in France and the head of the consortium who built the MUSE instrument on VLT. The galaxy formation and cosmology group (GALPAC) is currently hiring 8 postdocs and 4 PhD students, to work on the analysis of MUSE Guaranteed Time Observations as well as numerical simulations.

The positions are available from September 2014 (starting date highly negotiable), initially for 2 years, renewable for a third year, and come with a competitive salary and full benefits.

The applicants should have a PhD in astronomy or astrophysics, in a topic related to galaxy formation and evolution. Applications need to be submitted electronically to johan.richard@univ-lyon1.fr by Dec 15th 2013, as a single PDF including a brief CV, a list of publications as well as a short (3 pages max) statement of research interests. Late applications will be accepted until the posts are filled. The candidates should arrange for three reference letters to be sent by the same date.